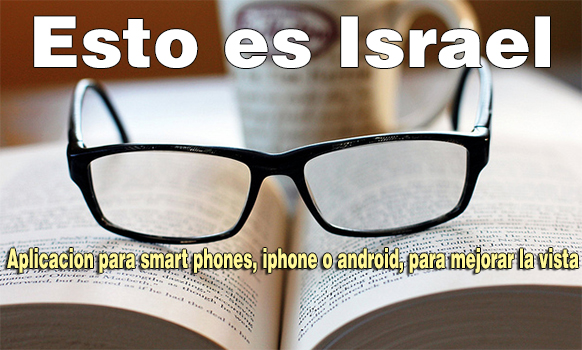 Aging can come with wonderful things like new-found understanding of priorities and deeper self-awareness, but getting older also comes with some inconveniences, like the need for reading glasses.

However – and you may want to put your reading glasses on for this one – a simple mobile app is said to be able to turn the clock back almost nine years for your eyes. GlassesOff, invented in Israel, helps individuals aged 40-60 improve their vision by playing a simple game only a few times each week. The app is based on research from Tel Aviv University, published in Nature.com’s “Scientific Reports”, which shows that presbyopia (literally ‘aging eyes’) is not caused by visual clouding, as previously thought, but by prolonged brain processing time of images.

‘Coding’ our brains to read better With these findings in hand, the team at Israeli startup GlassesoOff began developing a mobile game that can train the brain to bypass presbyopia. According to the research findings, the brain’s visual cortex is very similar to a binary code on a computer; like the 1’s and 0’s that instruct our computers what to do, any image in the brain can be represented as abstract Gabor patches (like the ones at every optometrist visit, that contain a big letter ‘E’) that vary in their frequency, contrast and orientation. Our brains too can be trained to differentiate between and bypass these variations, known as the art of neuroplasticity.

This change in our ‘perspective’ on vision is one of the revolutionary things about GlassesOff, CEO Nimrod Mader tells NoCamels: “When people think about their vision system they immediately think about the way their eye functions. However, while focusing on the quality of the image captured by the eye, many people forget the significant role that our brains play in interpreting images.”

Mader says that by training the brain with GlassesOff to adapt itself in cases of visual crowding, or the inability to identify words or objects inside a paragraph, reading glasses can be made obsolete.

Better vision is only three-months of play

The GlassesOff game is simple; after undergoing an initial diagnostic test to determine what kind of vision problems need to be addressed, the app constructs a customized training regimen. Practicing regularly three days a week for 12-15 minutes a session, individuals aged 40-60 are presented with grey Gabor. Over a period of two to three months, the user works to stimulate the visual cortex in the brain by memorizing the placement of the Gabor patches and eliminating the visual confusion that usually warrants reading glasses. “As you age, you need bigger letters and wider spaces between the letters in order to read clearly. But if you are trying to read a book, this option is not always accessible [unless you have a Kindle] and reading glasses are the inevitable option because no one is going to stretch the book out for you.” According to the study’s findings, there is more than 80 percent chance that the application will produce results for people between the ages of 40 to 60.

After each session, the GlassesOff app gives the user feedback on how their vision has improved, including tables and charts, which, (for the brave) can also be shared with friends on social networks. According to Madar, “Through the program, you reach various milestones that track your progress as you play so that the user isn’t just looking at the results three months ahead. It is always about getting to your next milestone that is just two to three weeks away.”

Indeed, the findings of the same “Scientific Reports” study tested at the University of California at Berkley showed that through the GlassesOff application and its use of a neuroplasticity-based strategy, the “eye age of the reader” can be reduced by a whopping 8.6 years. However, before this makes you toss your reading glasses for good, it is important to know that GlassesOff does not claim to cure presbyopia and other age-related eye conditions, and it is uncertain that playing the game for an extended period (over three months) of time can further improve eyesight beyond the aforementioned statistics. In addition, there is the price variable, the app costs $59.99 for an iOS or GooglePlay subscription (following a free 2-week trial period), and the fact that some experts, like Peter J. Bex of the Schephens Eye Research Institute in Boston, believe that all GlassesOff may really be doing is helping its users read fine print.

Has an Israeli researcher found mankind’s holy grail – the fountain of youth?

As incredible as it sounds, it is difficult to say if the GlassesOff neuroscience-based method of visual training works miracles on every one of its users. What is certain, however, is that this app is nice proof that in Israel, members of the scientific research sector and the technology sector can come together to create potentially game-changing products.