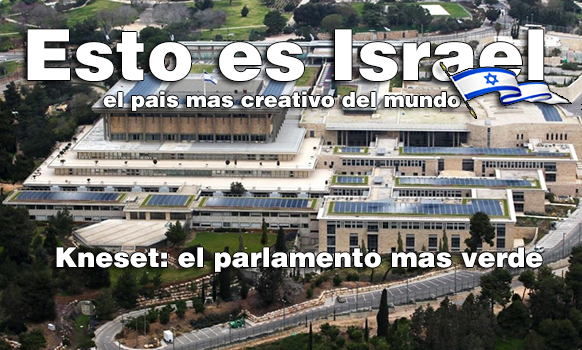 The Israeli parliament, or Knesset, is about to become the “greenest” parliament in the world thanks to the recent installation of a vast solar farm on the roof of the Knesset building in Jerusalem.

The recently unveiled 4,650-square-meter solar field consists of 1,406 photovoltaic panels, which will provide 450 kilowatts of energy. Along with additional energy-saving initiatives that were launched in 2014, the project is expected to reduce the Knesset’s energy consumption by a third by the end of 2015.

The new solar farm – which will absorb an abundance of sunlight thanks to Israel’s warm climate – is expected to generate most of the building’s electricity, including power for heating and air conditioning. “We are very proud to turn the Knesset into the greenest parliament in the world,” Knesset Director-General Ronen Plot said in a statement. The Knesset’s newest solar panel installation will make the German Bundestag the second-greenest parliament in the world.

The solar panel installation is part of a larger project called “Green Knesset”. The goal of this multi-year project is to convert the Knesset into a legislative branch that is guided in its conduct by the concept of sustainability. It consists of 13 initiatives focusing on saving water and energy. The Knesset will invest $1.75 million in these initiatives, and the average return from saving energy and water is estimated at $500,000 a year within five years.

From their eco-friendly, sustainable house of representatives, the newly elected members of the Israeli parliament can now set an example for the rest of the country. The Green Knesset project includes the digitization of documents, switching to LED lamps, using fewer power-guzzling appliances, and more. “It is a true revolution,” Knesset Speaker Yuli Edelstein said in a statement.

The Knesset joins a host of other organizations that are in part or wholly self-sufficient in terms of energy, such as Walmart and Ikea. These corporations not only enjoy the economic benefits of going “green,” but they also improve their public image. Says Edelstein: “This saving of energy has far-reaching environmental implications, not only in the direct economic sense, but also in the sense that it will dramatically reduce the harm caused to the environment.”